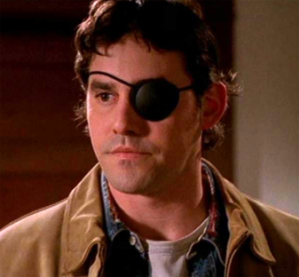 It’s not like I underestimate his value. He’s the nobody in a circle of heroes. He saves the world by simply loving his best friend. He provides Buffy a rocket launcher. After he gets over the fact he didn’t go to college, he gets a job and actually gives helpful assistance, like when he repairs Buffy’s house with his carpentry skills. I get it.

However, he does not get a free pass because he grows the fuck up. Do I get one for saying racist shit in my teens and early twenties? No, I do not. Am I a better, more informed person than I was? I sure as hell hope so. I expect nothing but the same from Xander. He should not get to just shrug and say, “I was young!” when someone reminds him that he treated Willow and Buffy terribly in high school or that he was nothing but a whiny ass while the same two women were in college.

That being said, he is a joy to loathe. Just watching him be a dick and not get what he wanted (initially Buffy and then in multiple ways later on) when he whined about it was just so satisfying. Granted, he maintains his friendships and position within the group, even as Buffy is ousted from her house in Season Seven, so my happiness in his misery was short-lived. Sigh.

One thought on “30 Day Challenge: Buffy the Vampire Slayer, Day 25: Character I Love to Hate”