30 Day Challenge: Buffy the Vampire Slayer, Day 24: Character I Love That Everyone Else Hates

Nobody liked The Brady Bunch after Cousin Oliver joined the cast. This is undeniable fact. Anytime a show brings on a young cast member to bring back the cuteness, the show’s done gone downhill, if it hasn’t already been given a shit time slot. And yeah, when Dawn was first introduced to Buffy the Vampire Slayer, I was downright pissed. How in the hell was Joss just gonna drop this bratty teenager into the mix without so much as a mention? And then Buffy died to save her squeaky ass? And then her infamous “getoutgetoutgetout” tantrum abraded my eardrums?? Well, fuck you, too, little Dawnie Summers. 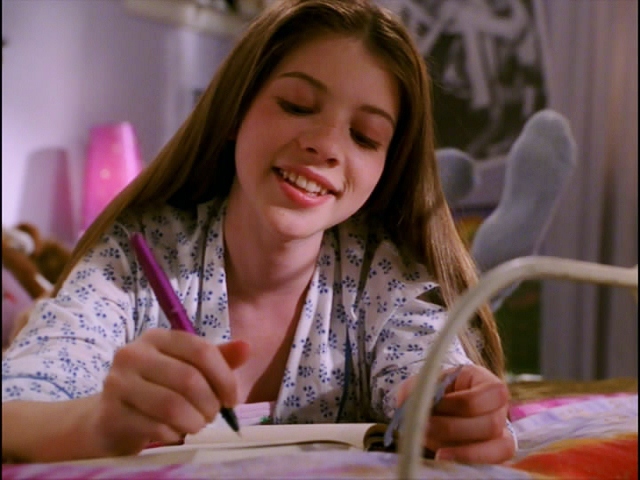 But upon further review – and many years between – I realized that, shit, I was way more annoying at 14 – 16 than Dawn ever was. Yes, her sudden appearance was jarring, to say the least, and Season Six brought out her absolute worst. But here’s the thing. Well, several things, which I will list.

Unfortunately, Dawn is kind of shoved out of the way in Season Seven, once it is surmised that she is not one of the Potential Slayers (although that speech Xander gives her was so sweet and makes me cry every time). If she’d gotten an episode like Spike’s “Lies My Parents Told Me,” I don’t think I would have been as annoyed, but we did get to see how much she had matured in the episode “Empty Places.” Her controversial choice to oust Buffy from their house? Yeah, that was spot on; Dawn didn’t do it because she was pissed at her sister. She is deeply connected to Buffy in ways no other character is, and not just because she was made from the Slayer’s blood. She understood Buffy needed time to recuperate and that she couldn’t do that under the constant strain of leadership, like she had been since the Potentials started showing up at their doorstep. She was also the only person who could have forced Buffy to take a break; not even Giles, whose relationship with Buffy was on the rocks after the events of “Lies My Parents Told Me,” could have done that. So Dawn, already adept at making difficult and painful choices, was strong and did what had to be done.

So you can bitch about her obnoxious, childish behavior all you want, but Dawn was around the same age as Buffy was when the series began, and she managed to act with more strength, grace, and intelligence than Buffy ever did. Maybe it’s because she saw her older sibling go through hell for their choices (literally and figuratively, in Dawn’s case), but I give her much more credit than that. She deserves at least that.

3 thoughts on “30 Day Challenge: Buffy the Vampire Slayer, Day 24: Character I Love That Everyone Else Hates”