Earlier this year, there was a Facebook challenge going around where people reported what their true favorite movies were, based on how often they watched them, as opposed to what they had always said they were. Kind of like how Rachel in FRIENDS always said her favorite movie was Dangerous Liaisons, but it really was Weekend at Bernie’s.

The reason I bring this up is because, in my first attempt at this topic, I had said that the third season was my favorite, and while this is still technically true – in terms that will be explained later on in this challenge – it’s not the one that I rewatch regularly. Oh, no, that award goes to Season Four. 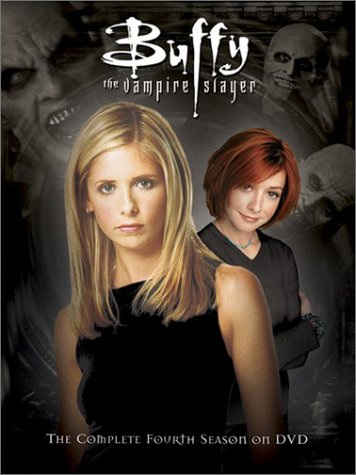 I know, I know … it has “Beer Bad” and “Where the Wild Things Are.” It heavily features boring and/or annoying recurring characters and underwhelming Big Bads. Seth Green’s Oz (spoiler alert?) leaves not even ten episodes in, and Charisma Carpenter’s Cordelia joins Angel on his own titular show even before the first episode airs. I get it. I really do.

But despite all of that, I feel it’s the most underrated and thematically consistent of the series. And I will back. that. shit. up. Joss Whedon himself said that season four was the beginning of them using “mission statements.” Season Four was all about transition: growing up and experimenting and exploring paths previously unknown. And part of that may include separating from your support system – your friends and family … which is exactly what happens with the core characters. They’re all learning who they are, and that’s a painful process, one that doesn’t seem to diminish as you get older.

The first episode shows Buffy, alone and bewildered in this brave new world, longing to return to a world that makes sense to her, where she’s strong and secure and her role is very defined. She’s jealous of Willow’s (Oz’s, too, but Willow was supposed to be the awkward one in their crew – honestly, this is the first hint of a rift between them that I literally just noticed) level of comfort on campus, and it’s only when Xander shows up with stories of his failed road trip that Buffy finally starts to perk up. She’s able to get her college sea legs fairly quickly after vanquishing the vampire Monday, but the rest of the season is Buffy adjusting to and failing at college life. She again obsesses over her boyfriend (because that’s apparently all she knows from three seasons of this damned show), but instead of integrating Riley into her current group of friends as she did with Angel, Buffy decides to ditch the Scoobies for a whole new gang, only they’re equipped with guns and high tech military paraphernalia. Granted, this literally blows up in her face, and it’s only her resourcefulness and resilience that keeps her from getting murdered by her boyfriend’s jealous mother figure, but I digress.

In contrast, Willow went to college, excited for the challenges – and spurty knowledge – higher education would provide, and her enthusiasm was such a pleasant change from the morose Buffy and the stunted Xander. Of course, this eagerness was also presented with a youthful arrogance, which was beautifully examined in “Fear Itself,” but instead of shying away from the danger that her magick posed, Willow wanted nothing more than to hone her skills, similarly to how Buffy would train with Giles. Of course, that training would also involve some sexytimes with new girlfriend, Tara – once Oz went on his way, of course. This could arguably be a bad decision, considering what happens in later seasons, but after three seasons of a mild-mannered, geyser-like reliable personality, it was a refreshing thing to witness.

Despite my utter disdain for Xander, I actually do feel for him throughout the season as he struggles with FOMO in a major way. His friends are improving their lives, both in their extracurricular demon-slayer ways and their studies, while he lives in his parents’ basement and takes whatever jobs he can find so he can pay rent. His frustration and confusion at growing up mirrors Buffy’s, although he has no mystical way of dealing with this, like learning new spells or killing a demon or two. Instead, Xander has sex with Anya and berates Spike whenever he can. Which … valid life choices, both. And honestly, I wish more kids would take Xander’s route, because college is not for everyone, and we need more skilled laborers, given that they are paid a living wage … dammit, I need to stop this line of thought now, or else I’m going off on a tangent. Anyway, his approach involves a lot of self-examination that isn’t any less valid than one attempted on a college campus.

And then we have Giles. Oh, Rupert. Now that I’m older, dear gawd, do I relate to you. I would love to live the life of a gentleman of leisure. In all honesty, though, I believe that Giles’ growth is more difficult than that of the other three: he has to transition from a father figure to a mentor and friend for Buffy and the gang. Not only does he have to do this for himself, he has to instill the concept in the others. For three seasons, he was a substitute parent and disciplinarian, his life on hold for the greater good, and when the Watchers’ Council dismissed him from his duties (and gave them to the oh-so-useless Wesley), I can only imagine how lost he felt. It’s only really addressed directly finally in “A New Man,” when Giles is transformed into a Fyarl demon, but this storyline actually continues into the final seasons of the television show, where Giles’ role is never as clearly defined as it was in the first three seasons.

It takes an entire set of 22 episodes – and the manipulation of Spike – for the group to realize what they have: friends and comrades in battle, something the Initiative tries and ultimately fails to structure. Although they no longer have the high school and the proximity it provided to keep them together, the Scoobies are truly a unit. Even though Buffy is the Slayer, she would have never been as successful – or hell, even survived – without the other three, which is why the penultimate episode, “Primeval,” is so powerful. They must resolve their issues and truly work together to defeat Adam, an admittedly terrible villain, but still.

And Season Four really does set up the rest of the series extremely well, especially Season Five. Gone is the Buffy who only wants to fit in and be a “normal” girl; she now wants to understand herself and her Slayer powers. Willow embraces herself fully, shedding the naivete and becoming arguably the most powerful character on the show. With a vigor we haven’t seen, Xander goes about doing whatever he can to be better than he or his parents are. And Giles begins to be able to see his own value, even if it doesn’t fit into the title of Watcher any longer.

Like I said above, I understand why this season is as divisive as it is, but if you actually examine it, it’s so much better than it appears on the surface. If you can get past – and maybe even guiltily enjoy – “Beer Bad,” you might find yourself surprised.

I can’t excuse “Where the Wild Things Are,” though. That is objectively a terrible episode.